HALF THE PICTURE celebrates the groundbreaking work of female film directors and investigates the systemic discrimination that has, for decades, denied 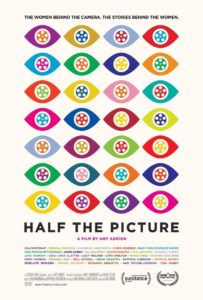 opportunities to far too many talented women in Hollywood. The film consists of interviews with high profile women directors including Ava DuVernay, Jill Soloway, Lena Dunham, Catherine Hardwicke and Miranda July, among many others, who discuss their early careers, how they transitioned to studio films or television, how they balance having a demanding directing career with family, as well as challenges and joys along the way. HALF THE PICTURE also includes interviews with experts about gender inequality in Hollywood including the ACLU’s Melissa Goodman, Sundance

Institute’s Caroline Libresco, Vanity Fair’s Rebecca Keegan, USC’s Dr. Stacy Smith and San Diego State University’s Dr. Martha Lauzen, who establish the magnitude of this employment discrimination issue as women are shut out, across the board, of an industry that systemically denies their expression and point of view. HALF THE PICTURE Director / Producer Amy Adrion joins us to talk about a unique time in the film industry where systemic change seems possible and whether, unlike previous efforts to address gender inequality in Hollywood, will this time be different?

For news and updates go to: halfthepicture.com

“Half the Picture is a vital, comprehensive documentary on a subject that’s so fundamental to the industry it’s about, you have to wonder why dozens of movies on this scale or bigger haven’t already been made.” – Leslie Felperin

“Half The Picture is an inspiring, important documentary that should be seen by as many people as possible, particularly those who aren’t aware of the problems women face in Hollywood.” – Manon de Reeper, Film Inquiry

“A platform for those who want to hear about the reality of being a woman in Hollywood from dozens of women who have lived it, it’s an invaluable resource.” – Rebecca Pahle, Film Journal International

“It’s experiential revelation as advocacy filmmaking, an incisive and inviting example of the personal as political.” – Serena Donadoni, Village Voice