It’s been 75 years since the start of the Atomic Age, with the U.S. nuclear 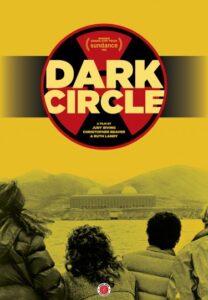 bombing of Hiroshima and Nagasaki killing hundreds of thousands of civilians, but its trail of destruction has never ended. The newly re-mastered  Dark Circle, being re-released through First Run Features, covers both the period’s beginnings and its aftermath, providing a scientific primer on the catastrophic power of nuclear energy while also relating tragic human stories detailing the devastating toll radioactive toxicity has taken on people and livestock—focusing in large part on Rocky Flats, Colorado, whose plutonium processing facility infamously contaminated the surrounding

no less potent today than it was 40 years ago. Co-director Judy Irving (The Wild Parrots of Telegraph Hill, Pelican Dreams) joins us for an informative and provocative conversation on the history and development of nuclear weapons and nuclear power facilities, as well as the clear and present danger this unimaginably destructive weaponry and  troubled technology continue to pose to the planet and the survival of humanity.

For news and updates go to: firstrunfeatures.com/darkcircle

For more about Judy Irving go to: pelicanmedia.org

Filmmaker’s Statement – When I set out to make a personal film about the impact of nuclear weapons and power on ordinary people, I had no idea that the movie would create such a ruckus, or that it would still be so relevant 39 years after its release. My aim was to point the camera away from experts and politicians, and find stories about how plutonium is affecting us, even in the absence of a nuclear war. Those effects are not only physical, but psychological and spiritual as well. Having grown up under this nuclear cloud, I wanted to show how nuclear power and weapons are in fact the same industry, despite government propaganda that urges us to see them as separate. Part of understanding this industry required that we travel to Japan to film interviews with survivors of the atomic bombings. We were astonished to discover that we were the first American film crew to do so. American writers and still photographers had been to Hiroshima and Nagasaki before us, but no documentary film crew until we arrived in 1979. To me, this spoke volumes about how much guilt and denial we bring to the issue. After its theatrical release, Dark Circle was accepted for a national broadcast on public television, but then PBS gatekeepers broke the contract. Claiming we were not objective, they insisted that we cut a sequence in which we name the corporations that build the hydrogen bomb, such as General Electric, whose slogan is, ironically, “We bring good things to life.” Many of these corporations are PBS underwriters. We refused to cut the Arms Convention sequence and fought the obvious censorship. It took seven years before PBS finally created a new series, “POV,” to showcase films with a strong point of view, and when Dark Circle was broadcast it won a National News & Documentary Emmy – for PBS! Flash forward three decades: with nuclear stockpiles growing, missile accidents in the news, and nine nuclear states including China flexing their powers with threats, Dark Circle is suddenly relevant again.

About the filmmaker – Pelican Media Executive Director Judy Irving is a Sundance-and-Emmy-Award-winning filmmaker whose theatrical credits include The Wild Parrots of Telegraph Hill, a feature documentary about the relationship between a homeless street musician and a flock of wild parrots in San Francisco, Pelican Dreams, about California brown pelicans and the people who know them best, and Dark Circle, a personal film about the links between nuclear power and weapons. In 2015 Judy was invited to become a voting member of the Academy of Motion Picture Arts & Sciences. Wild Parrotswas a “Top Ten Film of the Year” (National Film Critics’ Poll), was the highest-rated program on the 2007 national PBS series “Independent Lens,” and is now in international distribution. Pelican Dreams (completed in late 2014), features a young brown pelican who mistakenly landed — tired, hungry, and confused — on the roadway of the Golden Gate Bridge, creating a spectacular traffic jam and re-igniting Judy’s years’-long fascination with these ancient, charismatic birds. Judy spent childhood summers on the North Fork of Long Island, and came to love birds thanks to her grandfather. She graduated from Connecticut College with a degree in Psychology and worked as a freelance journalist in Montreal before hitchhiking across the continent and living on a handmade raft-house in British Columbia. Later, she received her Masters in Film and Broadcasting from Stanford University, and a Guggenheim Fellowship in Film. Her documentary film career has taken her to Alaska, Japan, Russia, Nepal, and Zimbabwe, with peace and the environment as her main areas of interest. For more about Judy Irving go to: pelicanmedia.org

“Dark Circle is one of the most horrifying films I’ve seen, and also sometimes one of the funniest (if you can laugh at the same things in real life that you found amusing in Dr. Strangelove). Using powers granted by the Freedom of Information Act, and sleuthing that turned up government film the government didn’t even know it had, the producers of this film have created a mosaic of the Atomic Age. It is a tribute to the power of the material, and to the relentless digging of the filmmakers, that the movie is completely riveting. Four Stars!” – Roger Ebert, Chicago Sun-Times (1982)

“You owe it to yourself to see this chilling documentary. A much needed warning sign on a very dangerous road. Rated: A.” – People Magazine

“The best of the recent films about the atomic age” – Valerie Ellis, In These Times

:The most eloquent, far ranging, and convincing film on the subject to date.” John Hartl, Seattle Times