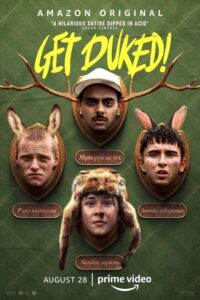 Beatroot as they embark on the character-building camping trip — based on a real-life program — known as the Duke of Edinburgh’s Award, where foraging, teamwork and orienteering are the order of the day. Eager to cut loose and smoke weed in the Scottish Highlands, the trio find themselves paired with strait-laced Ian, a fellow camper determined to play by the rules. After veering off-path into remote farmland that’s worlds away from their urban comfort zone, the boys find themselves hunted down by a shadowy force hell-bent on extinguishing their futures. From writer-director Ninian Doff — making his feature debut after a slew of award-winning music videos and short films for artists including Run the Jewels, The Chemical Brothers, Miike Snow, Migos, and Mykki Blanco

James Cosmo and a breakout young cast featuring Samuel Bottomley, Viraj Juneja, Rian Gordon, and Lewis Gribben. Creator and director Ninian Doff joins us for a raucous conversation on the brilliance of Eddie Izzard, getting a chance to bring his music video chops to a feature film and why the Brits are so attuned to the power of satire.

Watch Get Duked! at amazon.com/Get-Duked!

“Fabulously funny and subversive.” – Anne Brodie, What She Said

“Serves as a distinctive calling card for a gifted yet twisted comedian, one without the slightest qualms about turning a bucolic countryside jaunt into a bloody “The Hills Have Eyes”-style hunting party.” – Peter Debruge, Variety

“A rambunctious film shot through with daft humour and an endearing, toxic masculinity-smashing sweet streak.” – Jamie Dunn, The Skinny

“An anarchic, pitch black, generation gap horror comedy that’s also one of the funniest films in a year where we are desperately in need of a laugh.” – James Croot, Stuff.co.nz