The Indian Film Festival of Los Angeles (IFFLA) is a nonprofit organization devoted to a greater appreciation of Indian cinema and culture by showcasing films, supporting emerging 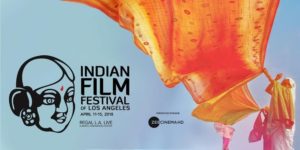 filmmakers, and promoting the diverse perspectives of the Indian diaspora. Each year the festival features a rich mix of film programs designed to build and support the growing interest in the Indian entertainment industry. This includes programming that cultivates an audience for Indian

films while supporting filmmakers of Indian descent in career development as they navigate the larger studio system in Hollywood. The Indian Film Festival of Los Angeles, runs from Wednesday, April 11 – 15 at Regal Live in downtown Los Angeles, featuring programs that include One-on-One program where film industry professionals from major and independent production and distribution companies are invited to participate in meetings with the IFFLA filmmakers; and panel discussions with speakers from the film industry. We are joined by IFFLA’s Director of Programming Mike Dougherty to talk about the past, present and future of Indian cinema and the increasing acceptance among mainstream American film lovers.

For news, updates and screening information go to: Indianfilmfestival.org